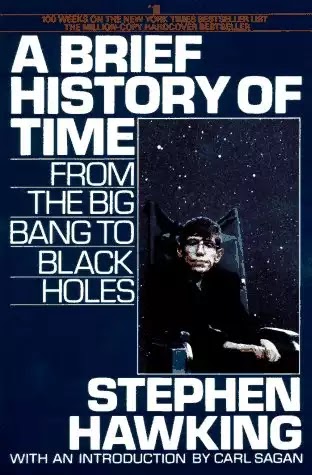 A Brief History of Time
Stephen W. Hawking writes about the history and present thinking of theoretical physicists in a manner the average person can understand. He begins with the earlier ways people understood the universe and moves to the present day, where many theories exist for specific pieces of the whole picture, but none of the theories cover the universe in its entirety.
Aristotle’s thinking that everything is made up of only four elements and absolute position and time characterize the universe leads to Ptolemy’s idea of heavenly spheres, both assuming the earth is at the center of the universe. Copernicus contributes the idea that the sun is the center, and Galileo concurs. Later observations with telescopes based on Galileo’s early instrument reveal the true nature of the earth and the sun in relation to the universe, which grows much larger than the early conceptions. The earth indeed orbits the sun, but the sun orbits the galaxy, which is full of stars. Additionally, many other galaxies are observed with ever greater clarity. The importance of the earth dimishes with this view. It is not the center of the universe, and in fact occupies an insignificant spot within the whole.
Sir Isaac Newton generates the physics that predicts the movements of heavenly bodies accurately enough, and Albert Einstein brings forth the general theory of relativity, which implies that the universe started with a big bang from a singularity of infinite mass and curvature, a single point with no dimensions. Hawking works with black hole theory, among others, notably the combination of quantum mechanics and general relativity. Where general relativity describes the very large objects in the universe, quantum mechanics describes the very small and includes an uncertainty principle. Hawking suggests through the combination of the two theories that no singularity existed at the beginning of the universe because the universe may have had no beginning.

Physicists continue to seek a complete, unified theory of the universe, although this may not be possible to discover. The driving motivation is the thirst for knowledge, while another human motivation, the discomfort of uncertainty, resists the discovery of what may be taken as the mind of God. The author is fully aware of what scientific discovery means to the world’s religions that cling to older models of the universe, and mentions this often. Earlier physicists also had problems with religions, so this is nothing new or anything to fear, as long as the science is reliable and the approach to bringing out the truth is handled gently. Hawking accomplishes this with his friendly tone and humor.